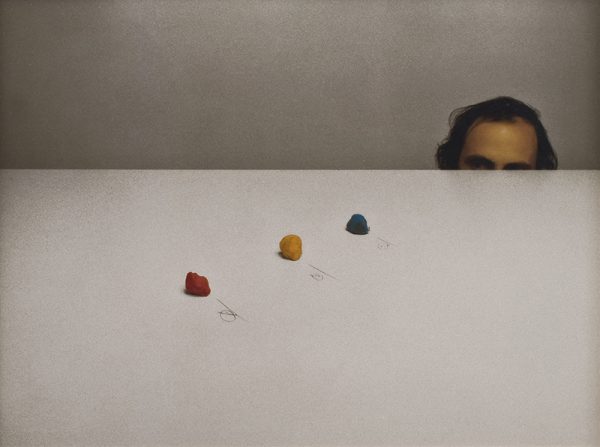 The 70s were a period of excellence which saw many artistic personalities who had put themselves in order of battle and provide ample and sophisticated work. Some of them were very young, newly students, but they showed unexpected maturity. Decebal Scriba and Serge Spitzer were part of the first generation of  the newly created design section at the Institute of Visual Arts Bucharest where the young students met each other. Serge Spitzer left the country in 1972 while in the following years, like many others, Decebal Scriba suffered the hazards and censorship under a stifling dogmatic regime that quickly stomped out any chance of fulfillment or artistic independence.

Still, Scriba produced sharp conceptual and performative work of rare intelligence  addressing issues of both formal and textual language, the analysis of systems of spatial representation, symbolic gestures and forms, and doing performance art that, in the East of Europe was a genre perfectly suited to the underground context: dazzling acts of artwork that often without the leaving slightest trace.

Serge Spitzer had better fortune developing a remarkable international career after settling in the USA. But a careful analysis of his early work leaves the impression that, in his training, he fed and drew on a contextual point of view in such a way that brings him particularly closer to his companion. His unique propensity towards concealment, his way of placing objects in space, indicate the artist’s unusual sensitivity for architecture and other finite structures. His work is marked by the presence of objects or various structures as events or texts that form arrangements without trying to modify the original structure. The energy brought forth by trying to obtain an object only through perception becomes an integral part of the contemplation process: absence is just as much a part of the expression as is presence.