Dan Perjovschi (b. 1961) lives in Bucharest and Sibiu. In his drawings, he approaches political and social themes, involving himself with the independent scene, and maintaining constant dialogue with the public space, either through his drawings, which go beyond the comfort zones of art institutions, or through debates in which he engages not only as an artist, but also as an active player in civil society.

His first retrospective took place at Duke University’s Nasher Musem, in 2007, and the second at the Tours Centre de Création Contemporaine, in 2012. He was awarded the George Maciunas prize in 2004, and, along with his wife, Lia Perjovschi, the European Cultural Foundation Princess Margriet prize, in 2012. In 2016, he was awarded the Rosa Schapire Kunsthalle Hamburg prize, by professor Kasper Koenig.

At the invitation of the group from the SOS Pata Rât initiative, the artist Dan Perjovschi participated in the spring of this year in a project on the theme of housing—project dedicated to the public space (Orașul vizibil [The Visible City]) taking place in the middle of Roma communities (and others) that currently live alongside a landfill for the city of Cluj-Napoca. The project triggered a new alarm signal in view of the social segregation of over 300 families and the conditions of a decent life. The theme of housing could not have been brought to discussion in a place more problematic than Pata Rât, were hundreds of Roma from Cluj-Napoca were taken through repetitive evacuations, the largest being in 2010. During a three-day drawing workshop, Dan Perjovschi worked with children and, in his turn, made his mark through drawing and text on the ghettoized area, constantly delayed on the authorities’ political agenda. The children were encouraged to imagined an ideal house, a place for them, and to draw alongside the artist, uninhibited. Dan Perjovschi displays photographs taken during the workshop, reproductions of the drawings, and continues contributing to the work by making a coloring book put on sale with the purpose of directing funds to the disadvantaged children of Pata Rât. 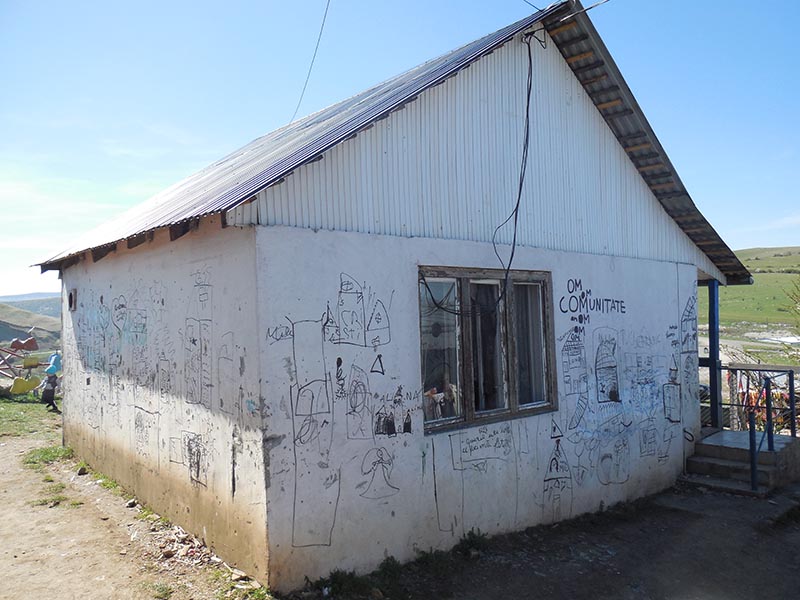