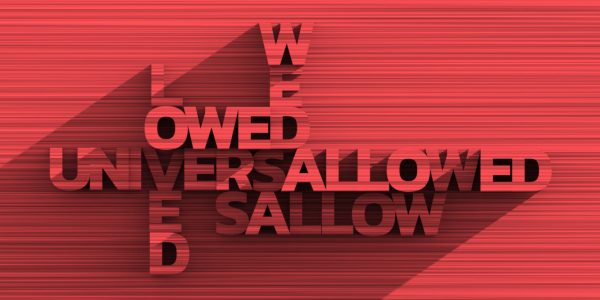 Location: The Tower of the Batteries Factory

The exhibition is part of a wider cultural project, funded by the Administration of the National Cultural Fund (ANCF) and coordinated by Liliana Mercioiu Popa and Aura Bălănescu. The project will also include meetings, discussions with artists and workshops. By the location chosen, the Tower of the Battery Factory, the project aims to draw attention to the potential that former industrial spaces present for the cultural life of the city, while making people aware of the risk of losing these buildings by ruin. “The exhibition entitled UNIVERSALLOWED is based on a curatorial concept that starts from the multiple fragmentations and juxtapositions allowed by the title itself. This umbrella term covers a series of phrases resulted from various ways of grouping the letters: universal allowed, universal lowed, universal all lowed, universal all owed, universal sallow owed, universal all owed wed, universal lowed wed, universal low wed, universe allowed, universe all owed, universal loved, universe all loved. This play with words is intended as a demonstration of the malleability and versatility of spoken languages, characteristics that allow each of us to destructure a linguistic whole in order to use fragments from it, according to our own subjectivity. The artistic projects included in the exhibition build their discourse taking advantage of this precariousness, this intended volatility of the general concept. Even the space taken up by the artworks, with its abandoned objects, becomes a universe allowed, partially integrated in the artistic processuality.” Maria Orosan-Telea, curator.
The following artists will exhibit: Zsolt Asztalos (HU), Aura Bălănescu, Nikolay Bozhinov (SRB), Ciprian Chirileanu, Cosmin Haiaș, Ciprian Homorodean (RO/ES), 13m10j, Livia Mateiaș, Liliana Mercioiu Popa, Branislav Nikolic (BG), Sorin Oncu, Renée Renard, Petrică Ștefan, Bogdan Tomșa, Nicolae Velciov.