Andrei Ujică (b. 1951) studied literature in Timișoara, Bucharest, and Heidelberg. Published poetry, prose, and essays at various intervals since 1968. Emigrated to Germany in 1981. In 1990, after having made a detour through theory, he decided to make films.

Together with Harun Farocki, Ujică co-directed Videograms of a Revolution (1992), which was quickly recognized as a landmark film on the relationship between political power and the media in Europe at the end of the Cold War. His second film, Out of the Present (1995), tells the story of cosmonaut Sergei Krikalev, who spent ten months aboard the space station Mir, while back on earth the Soviet Union ceased to exist. Out of the Present has been compared to such emblematic titles in film history as Stanley Kubrick’s 2001: A Space Odyssey and Andrei Tarkovsky’s Solaris. The Autobiography of Nicolae Ceaușescu (2010), a wide fresco of Romanian history between 1965 and 1989, concludes his trilogy examining the end of communism. It was the first found footage film ever included in the official selection of the Cannes Film Festival.

Ujică calls this kind of filmmaking syntactic cinema: “I try to reconstruct the film of history with fragments of conserved time.” By investing all his creative energy into expanding the boundaries of the montage film, as it was invented by Esfir Shub in the 1920s, Andrei Ujică has become one of the most important innovators of film language in contemporary cinema.

Andrei Ujică is well-known as one the most original film directors, whose style named “syntactic cinema” is based on montage as a fundamental instrument of the discourse. His trilogy based on the collapse of communism includes: Videogramele unei revoluții [The Videograms of a Revolution] (in a collaboration with the deceased Harun Faroki), Out of the Present and Autobiografia lui Nicolae Ceaușescu [The Autobiography of Nicolae Ceaușescu]. Attempting to reconstruct history through “time capsules” rediscovered in image archives, Andrei Ujică transforms secondary material into primary discourse, allowing images to tell their story and history – their unchanged reality. The recently restored film, Out of the Present, starts from a true event, built from the archival films, and associates voices that reinterpret and fictionalize the truth. The astronaut Sergei Krikalez leaves in May 1991 from the USSR on a mission on the space station Mir, and ten months later lands in Russia, after the dissolution of the Soviet Union. 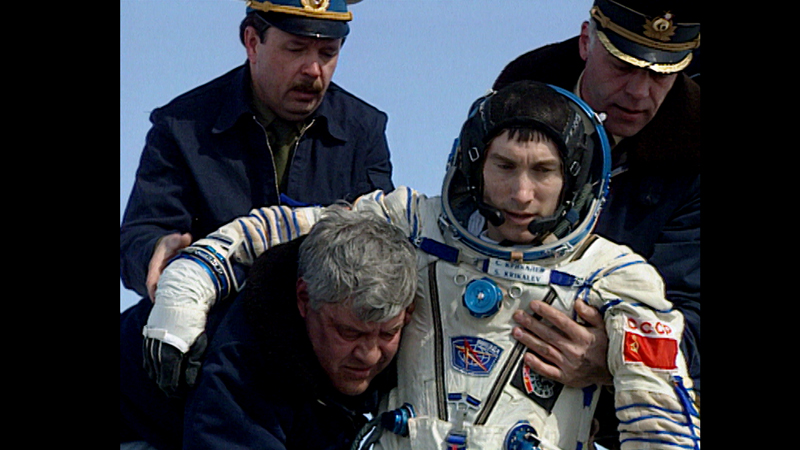