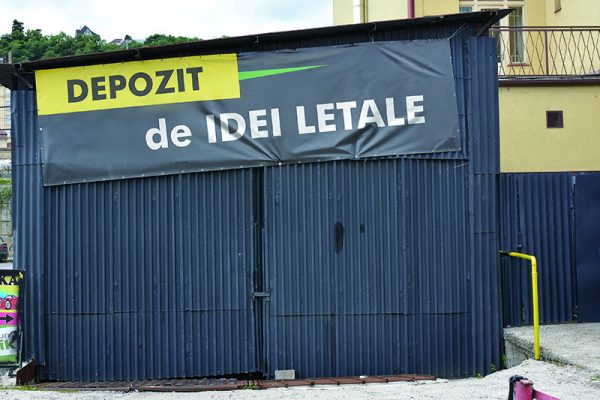 PEPLUSPATRU Association it’s a think-tank platform for cultural exchange which is recognized for its project Centre for Visual Introspection (2008-2012) and publishing platform P+4 Publications. Centre for Visual Introspection (CIV) is an independent institution and platform for collective research founded in Bucharest in 2008 by artists Anca Benera, Arnold Estefan, Cătălin Rulea and art historian Alina Șerban. Emphasizing “introspection” as a method of research, CIV projects are dedicated to spaces of artistic encounter present within the East-European context and the (self) representational politics of the art institution. CIV participated in the exhibition Intense Proximity, La Triennale, Palais de Tokyo, Paris (2012), the festival Inexactly This, Kunstvlaai, Amsterdam (2012), initiated numerous exhibitions, lectures, workshops, public art projects, Ars Telefonica (2008); Making Off (2010); 1990-2010 (2010); Self Publishing in Times of Freedom and Repression (2011), The Imaginary Institution (2012-ongoing) and the publishing platform P+4 Publications etc.

CIV starts from Cornelius Castoriadis assertion that institution is both imaginary (translated as fictional) and functional-economic, aspiring to autonomy, which means in Castoriadis words to encourage “in individual minds a major degree of solidarity and reciprocity”. Philosopher Cornelius Castoriadis contrasted heteronomy from autonomy noting that while all societies create their own institutions (laws, traditions and behaviors), autonomous societies are those in which their members are aware of this fact, and explicitly self-institute (αυτο-νομούνται). In contrast, the members of heteronomous societies (hetero = others) attribute their imaginaries to some extra-social authority (e.g., God, the state, ancestors, historical necessity, etc.).

CIV reflects, in an introspective manner, on the material and immaterial resources of the art institution and its potential to re-invent itself anew, to transcend the spatial, temporal and economic limitations, through a series of urban interventions in Timișoara’s public space.