Paul Neagu (1938-2004) graduated from the Institute of Fine Arts, Bucharest in 1965. In 1970 Neagu left Romania and after a few months in Edinburgh, he made London his home, becoming a British citizen in 1977. In London his work was first seen at Sigi Krauss Gallery in 1971 where he presented Cake Man, an edible sculpture event. This was followed by solo exhibitions at the Serpentine Gallery (1973) and Modern Art Oxford (1975), with each exhibition carefully constructed by Neagu himself. He began teaching in 1973, first at Hornsey School of Art and then at the Royal College of Art. In 2015, The Henry Moore Institute in Leeds organized the survey exhibition Paul Neagu: Palpable Sculpture.

Exhibitions created by Paul Neagu at the Gallery of Generative Art housed in his private flat in London, converted into an independent contemporary art space; actions staged at the Sigi Kraus Gallery in London and the Demarco Gallery in Edinburgh; and exhibitions held in a private flat in Bucharest. With regard to these exhibitions (presented via their photographic documentation) hierarchical considerations are less important; what is interesting, apart from the precious information they convey, is the fact that they signal the existence of a matrix made up of inter-human relations, networks of communication, and also conditionalities, which make the works and lives of the artists become more deeply anchored in the contexts that generated them. 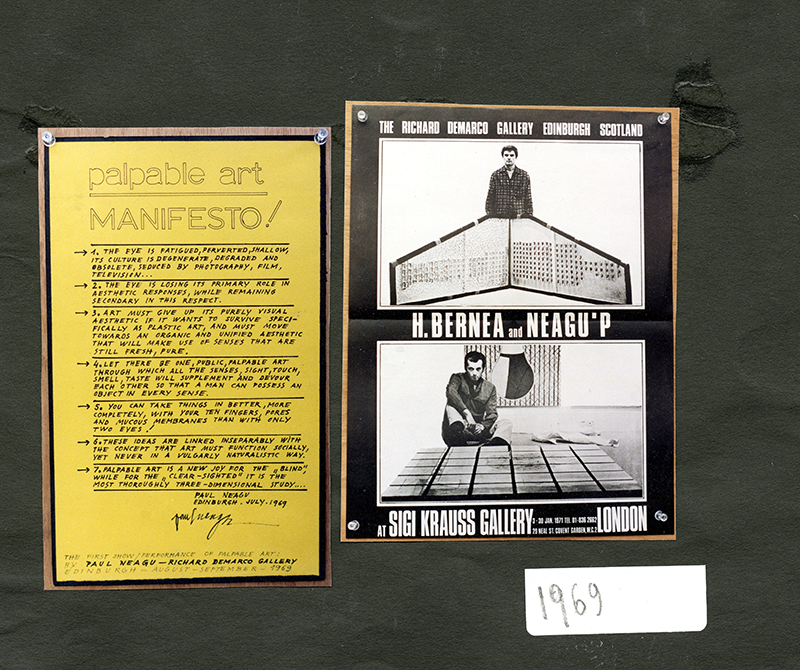 1. Paul Neagu, montage made of facsimiles, the 90s, Collection Anca and Mihai Oroveanu