Matthias Megyeri (b. 1973) is interested in how the human mind produces practical solutions for visible contemporary psychological illnesses such as paranoia and the problems of security as well as how one can create an alternative model by still keeping the conflict between power and control alive in the design process. With Sweet Dreams Security®, his commercial home security company and brand established in 2003, Megyeri proposes a change in the way in which one approaches the “institution of security,” demanding to rethink the way security is traditionally reproduced, and creating a line of alternative products, all by a simple gesture.

The Sweet Dreams Security series of works and urban interventions by artist Matthias Megyeri comments upon the increasingly frequent presence of corrals of all kinds that appear within public space, but are equally prevalent in private space. The need for protection and surveillance determines an accumulation of aggressive elements which are socially accepted, but are paradoxically packaged as harmless and sometimes even aesthetically pleasing. Following his travels to Timișoara, Matthias Megyeri identified several points in the city where the presence of surveillance cameras and imposed boundaries within public space can generate ironic responses which attract attention to contradictory attitudes. On the faces of historical buildings being renovated in the city center, there is already a dark colored netting obscuring them, a sort of “wrapping accomplished by a spontaneous Christo”, cut here and there in order to allow for the manifestation of nature and technology: red geraniums in windows and surveillance cameras standing out. Adopting the same wrapping material, the artists adds an embroidered textile surface, a drapery which copies the pattern of gratings on house windows. Simulating a self-imposed distance from passers-by, this intervention oversizes the grating patterns and transforms them into an innocent, abstract form. 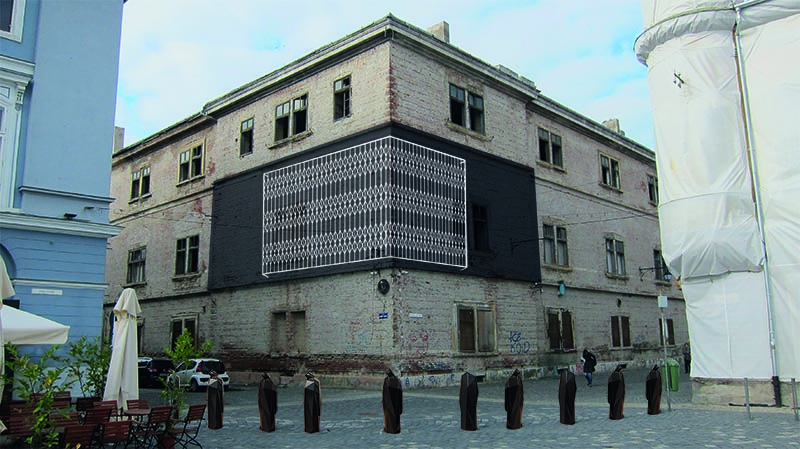