Claudiu Cobilanschi (b. 1972) lives at the boundary between art and media, using, as journalist, multiple mediums for different kinds of expression and, as an artist, the benefit of these media’s mutual conflict. In his practice, he is approaching issues of stereotypical thinking, forecasting and physicality, etc. projecting messages in different mediums: photography & performance, super8 cinema, studies of expressiveness in conventional images, video-documents of immigrants, DIY saunas, interactive movies, etc.

Iulia Toma (b. 1974) is a mixed-media artist who works with the means of aesthetic expression through textile, as well as with photography, painting, installation and text in each work. Recently she has been focusing on social issues that she expresses in her own individual way: feminism, women’s rights, interpersonal relations of closed communities, the materiality of urban living, social justice etc. She teaches in the Department of Art & Design, Textile section at the National University of Arts Bucharest.

In his works, Claudiu Cobilanschi investigates mass-media stereotypes, the possible community models of the day and the political attitudes challenging externally and internally imposed norms. Iulia Toma is an artist who gives special attention to the “pleats” formed by the past and present socio-political climate in the representation of the body and image of the woman. For the biennale, the two artists propose a “solar monument”, inspired by the summer showers people designed in their yards and gardens. Displaced and re-signified in an urban context, the improvised showers contain and maintain “the most lucid moments of human progress” based on native, folk creativity and technical intuition. Starting from the basis of these rural works, the artists introduce a new horizon of significance; navigating new routes or contexts, the shower becomes a Bow, and may become a satellite or a space capsule. “How much nostalgia and how much progress can you assign it?” 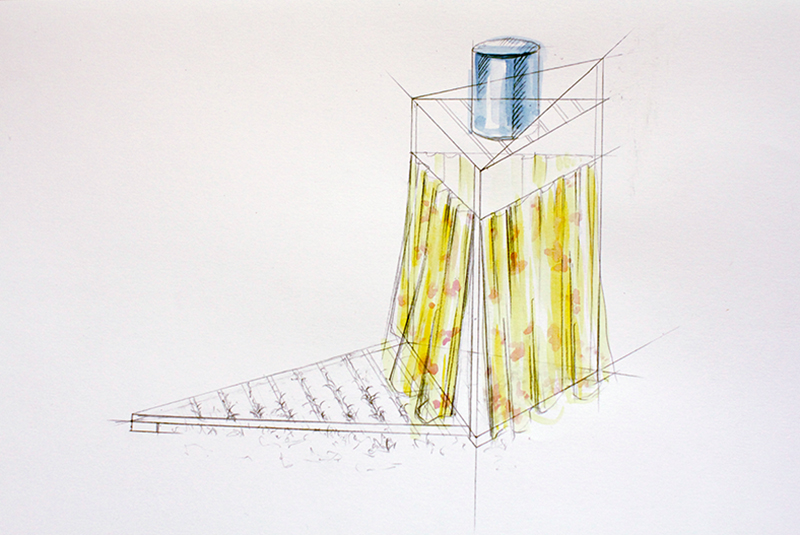