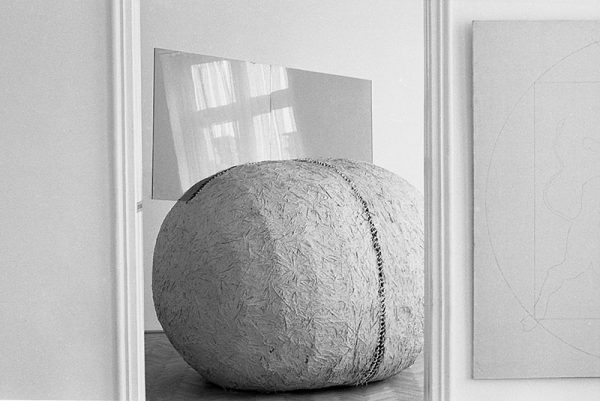 The present exhibition is an extended version of the one organized by Salonul de proiecte, Bucharest, in February 2017, titled Situations and Concepts. Like the previous exhibition, the current version investigates an episode of conceptualism from 1969-75 via the connective networks and exchanges of ideas that brought together a nucleus of artists originally from Romania. The incentive for such a historical investigation arose from the Situation and Concept exhibition held in May 1974 at the Orizont Galleries in Bucharest.

Beyond the Concept Frontier aims to widen the spectrum of implications generated by revisiting the original exhibition. In the vocabulary of the current exhibition, the artworks combine with rich auxiliary materials: letters, documentary photographs, sketches, posters, and this accumulation of “traces” allows a partial reconstruction of a collective mood and working climate in which vitality of ideas and the desire to experiment dominated the conversation about art. An important component was the emphasis on artistic research, revealing the discursive articulation of ideas about art and the imagining of works which, in the majority of cases, never came to fruition. The relationships between the artists are not only two-directional; they can ricochet in other directions at any time and incorporate different names, imagine new connections and form new zigzag trajectories. Through the conjugation of heteroclite elements it becomes obvious that the history of art is also a history of micro-narratives, that the personal-subjective factor is just as important as factual analysis and objective research or theorization of artistic positions, that the “affective space” weighs at least as heavily as the socio-cultural or political space.

This approach also allows a filigree evocation of multiple exhibitions, both large and small, held both in Romania and abroad, in both institutional and non-institutional settings, all of them relevant to the directions explored: the 1971 Paris Biennale; exhibitions at the Galeria Nouă in Bucharest; exhibitions created by Paul Neagu at the Gallery of Generative Art housed in his private flat in London, converted into an independent contemporary art space; actions staged at the Sigi Kraus Gallery in London and the Demarco Gallery in Edinburgh; and exhibitions held in a private flat in Bucharest. With regard to these exhibitions (presented via their photographic documentation) hierarchical considerations are less important; what is interesting, apart from the precious information they convey, is the fact that they signal the existence of a matrix made up of inter-human relations, networks of communication, and also conditionalities, which make the works and lives of the artists become more deeply anchored in the contexts that generated them.

An exhibition co-produced by the ArtEncounters Foundation, Timișoara and Salonul de proiecte, Bucharest.